Picasso created some of the most influential works of the 20th century, and now, his works are in the NFT space thanks to the Just NFT fund. Picasso’s “Femme Nue Couchee Au Collier” is the first Picasso painting to become an NFT, having been purchased at Christie’s auction for $20million.

Pablo Picasso was an artistic genius of the 20th century – and the Just NFT fund is bringing his work, as well as other influential artists’ work into the 21st century. The 20th century was marked by art that was purpose-based – like Picasso’s dynamic work “Guernica”.

NFTs are a perfect medium to introduce people to classic artwork, and the Just NFT fund is also featuring work by Andy Warhol, and Beeple. These talents show that NFTs are simply the works that can be collected now, as these works are simply out of reach otherwise.

Tron and the innovative blockchain art company Just NFT fund are all in on this – and why not? According to the company,

“The NFTization of such important works of art is more likely to break through the technology circle and attract full attention in the fields of art, collection, investment, and finance, and then to business in these industries. At the inception of the JUST NFT Fund, Justin Sun told the media in a recent interview that “the mission of the JUST NFT Fund is the NFTization and blockchainization of the world’s top artworks, and to build a bridge between the world’s top artists and blockchain.” Since its establishment, the fund has been adhering to Justin Sun’s consistent high-profile and quick-acting style, actively purchasing top artworks by leading artists in the global art market, and creating the first collections list within a few weeks.”

So let’s be a little bit serious here – Pablo Picasso is pretty great, and Just NFT is taking full advantage of other art enthusiasts that simply didn’t want to deal with a Picasso like “Femme Nue Couchee Au Collier” Which now has a NFT form – thanks to the Just NFT fund.

Just NFT fund is barking up a tree that is worth billions. For example, Picasso’s “Guernica” demonstrated what bombing raids could do to a person with an artistic temperament, and it is only a matter of time until there is a Guernica NFT. For better – or worse – Guernica will be remembered. Thanks, Pablo. 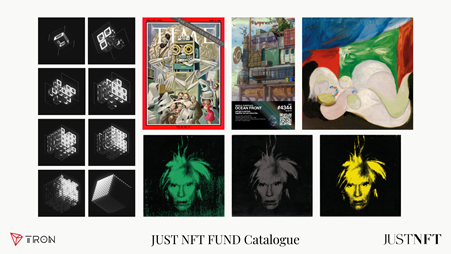 US Treasury yields are soaring, but what does it mean for markets and crypto?