In the scenario of NFT artists in Italy – and elsewhere – Dangiuz stands out. Born in Turin in 1995, he is a graphic designer and has reached the top 5 of the most acclaimed artists, with a sales record of over $300,000.

Following the sale of Beeple‘s NFT work at Christie’s auction for $69,346,250, digital art has become increasingly popular: art in its formal and stylistic connotations that finds space and visibility in digital channels and platforms dedicated to the sale of NFTs.

NFTs identify themselves as a non-interchangeable art, with an intrinsic and extrinsic value of uniqueness. It is this uniqueness that increases the value of the work, as well as its certification and authentication.

Dangiuz has a considerable following on Instagram, over 65,000 followers: his posts are his works and seem to be almost the highest achievement of the digital concept.

The titles of his works are short, as if encoded, telling the story of the work succinctly, a work that is, by contrast, visually complex.

The NFT works of Dangiuz 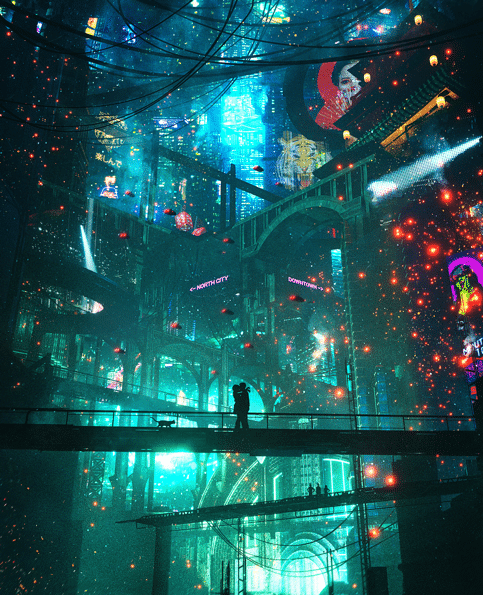 In “Kiss on the Bridge”, the lovers, at the centre of the scene, are suspended in an enveloping dreamlike atmosphere that distracts the viewer from the natural world by capturing them in the digital one.

The two lovers are suspended in a dreamlike, enveloping world of cold and warm colours that synergistically move in the ether and neon of a city immersed in LEDs and technology, in advertising signs that evoke the 1980s and Blade Runner. 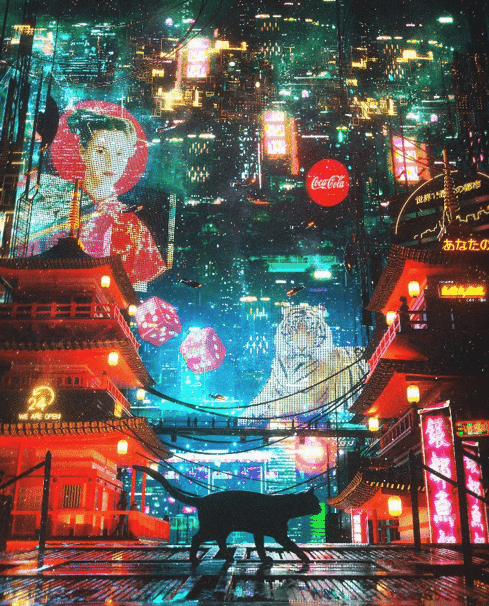 The same luminous signs that recur in the work “Started from the Bottom” in a scenario in which technology stands out, and a solitary cat that seems impassive and at the same time overpowered.

Technology, lights, everything electronic seems to dominate the scene of the works, making technology the protagonist in an exemplary and concrete way.

The reality described is nothing other than comparable to the light of the screen of a mobile phone or a PC: they cover the sky and surround the human or cat that crosses this reality.

It is the awareness that the sky is being replaced by a screen, and that the eye of today’s observer is the one wrapped in the light of LEDs, pixels and technology.

Reality is changing, the digital is an integral part of art, its value and everyday life. 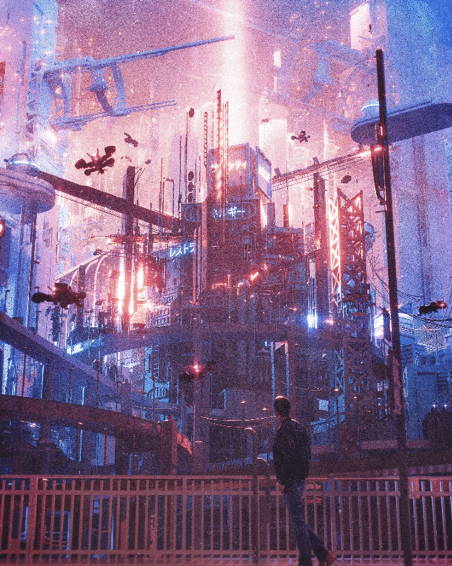 In “Last Sunset” there is a sunset: the lights are faithfully those of a sunset, which seems to be the result of something artificial, with a man observing drones and digital infrastructures.

Dangiuz’s works are the dawn of a new art: digital and unique.

The post Dangiuz, the $300,000 NFT artist appeared first on The Cryptonomist.