After dropping all the way to $32,000 last week, Bitcoin (BTC) has bounced back once again and is currently in recovery mode. At press time, BTC is trading 1.75 percent higher at a price of $34,297 with a market cap of around $644 billion.

Although Bitcoin continues to face strong resistance at the $35,000 level, some of the on-chain metrics are showing considerable improvement of late. The amount of BTC inflows to exchange wallets have dropped suggesting a reduced sell-side pressure. On-chain data provider Santiment reports:

The amount of daily inflow of #Bitcoin to known exchange wallets, as well as the total supply of $BTC on exchanges, have experienced a sharp 50-day drop, which may point to diminishing sell-side pressure.

This drop in the Bitcoin exchange inflow suggested that fewer coins are available at the exchanges for liquidation. At the same time, data from Glassnode shows that the BTC hash rate is showing signs of strong recovery.

After hitting a low of under 75 exahashes on June 28, the Bitcoin hash rate has recovered more than 33 percent since then. The decline last month came amid the Chinese government imposing a full-scale crackdown on local crypto miners. As a result, a large number of miners have turned off their mining rigs withdrawing operations.

Most of the miners have started moving their operations to other western countries especially the EU and North America. The Bitcoin hashrate remained low as a result of this. However, the good thing is that the Bitcoin hashrate has started recovering once again.

The network is regenerating as it should. pic.twitter.com/5Q4HIVbMSV

This means that miners have started accumulating once again and are unwilling to sell at this price. The miner position remained negative and in deep-red throughout the last month of June. 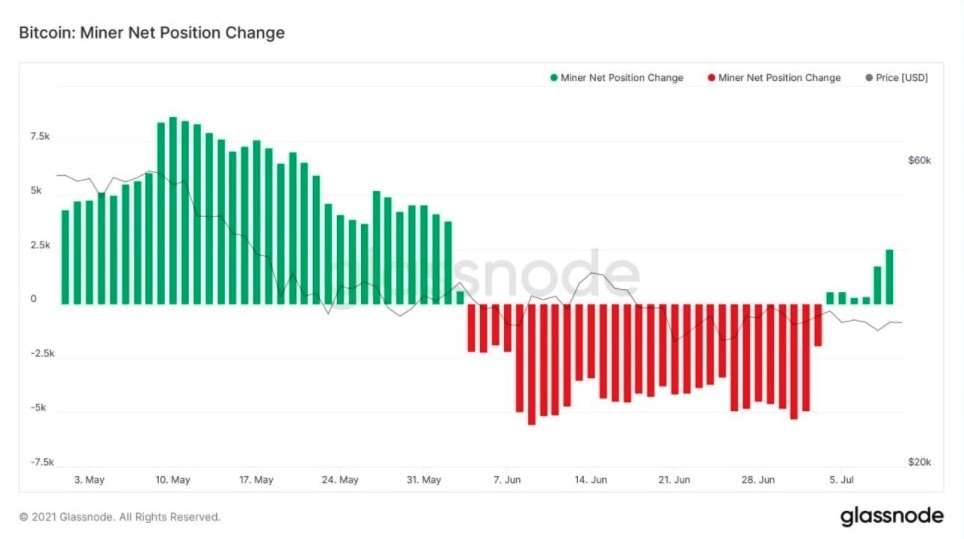 The improvement in these on-chain metrics shows that optimistic investors are getting back into the game. The positive development with the on-chain data shows that Bitcoin can resume its northward journey anytime soon.

The question is whether BTC will be able to move past the $35,000 resistance convincingly. Speaking to CNBC last week, Craig Johnson, chief market technician at Piper Sandler said Bitcoin could witness a prolonged period of consolidation before starting the northward rally. He added:

You’ve already seen bitcoin correct about 45%. When you go back to the last two prior cycles, those crypto cycles lasted about 1,000 days. You’ve got to be prepared to batten down the hatches and kind of wait for this to consolidate for quite some time longer before you start the next big major leg higher.

CFTC Chairman on US Crypto Regulation: We Have to Rely on 70-Year-Old Case Law to Determine What’s a Security or Commodity