The cryptocurrency market continues to stall. Having climbed as high $2.6 trillion as recently as two months ago, its total value now sits at $1.4 trillion. This is a 46% climbdown, with most coins falling by similar (or higher) percentages over the same timeframe. However, while the market has witnessed slippages over the past few days, these present a great opportunity for buying coins on the cheap. Accordingly, we’ve picked the 5 best cryptocurrencies to buy at low prices. This covers coins priced low on an ‘absolute’ scale. It also covers tokens that are cheap relative to their potential longer term value.

Nonetheless, there’s a case to be made that bitcoin is currently the cheapest cryptocurrency relative to its long-term value. Recent research from Pantera Capital showed that it’s 36% below its 11-year exponential trend. This was on June 4, when BTC stood at around $40,000. Now, at a little over $32,000, BTC is 48% below where its 11-year price history indicates it should be.

On-chain data indicates that the biggest whales are certainly scooping up underpriced BTC while they still can.

#Bitcoin balance on OTC desks continues to decline as bigger players continue to accumulate at these lower levels.https://t.co/7q63SMp574 pic.twitter.com/yHimkIJY4d

At the same time, exchanges are beginning to witness an increased outflow of bitcoin, as investors buy BTC cheap and withdraw it for the longer term.

#Bitcoin exchange balances have started to show signs of sustained outflows since the sell-off on 22-June.

Over the last three weeks, approx 40k $BTC have been withdrawn, 28% of what came in.https://t.co/2ccB5QIQoD pic.twitter.com/VpsDnOGE5Q 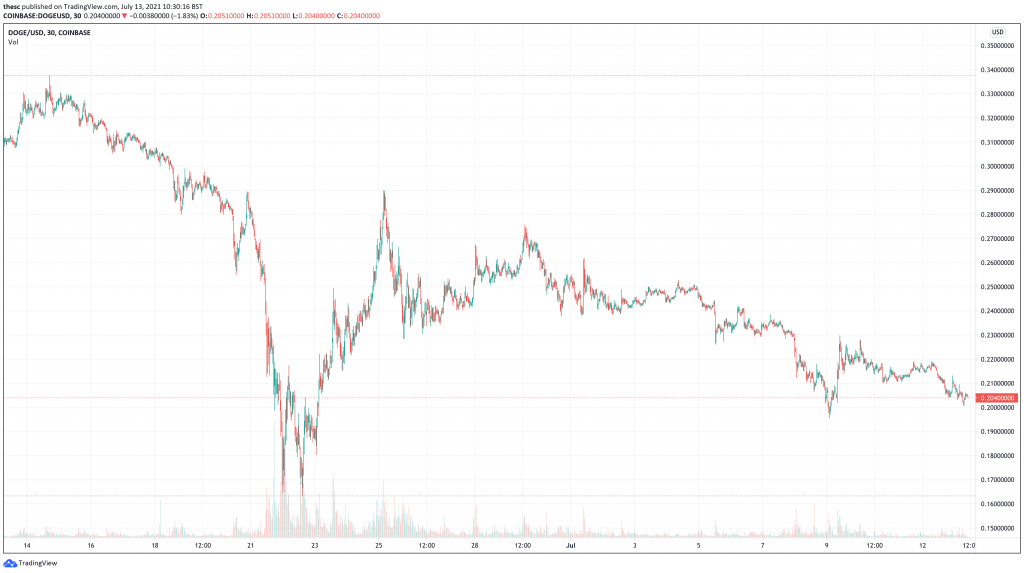 This obviously isn’t great performance. However, with a price of only $0.2029, DOGE is certainly cheap. More importantly, there’s reason to believe it will continue to experience price rises in the not-too distant future.

Dogecoin has a couple of important software upgrades on the horizon that will potentially make it more usable and valuable as a network. The first will bring SegWit and check sequence verify (CSV) to the cryptocurrency, allowing for second-layer solutions (à la Lightning Network) and greater capacity of its base layer. The second will substantially lower transaction fees, making Dogecoin more viable as a potential network for everyday payments.

These updates follow recent efforts from Elon Musk to invite developers to work on Dogecoin. While the cryptocurrency has long been based on Bitcoin Core’s code, a growth in development may help it branch out a little bit more on its own.

It’s also worth pointing out that dogecoin continues to benefit from a large community. Impressively, its subReddit has more than half the number of subscribers as the Bitcoin and Cryptocurrency subReddits. Given just how small it is compared to Bitcoin and crypto as a whole, this suggests that its community has an outsized effect on its price movements. It also shows why DOGE is one of the 5 best cryptocurrencies to buy at low prices, since its community is certainly capable of making it jump over the short-term.

Cardano (ADA) is another cheap cryptocurrency with considerable potential. It continues to stand at around the $1.31 level. This is 3% down compared to 24 hours ago and 7% down compared to a week ago. ADA is also 46% below its ATH of $2.45, while it’s 11% down in the past 30 days. This is all pretty much in keeping with the rest of the market. 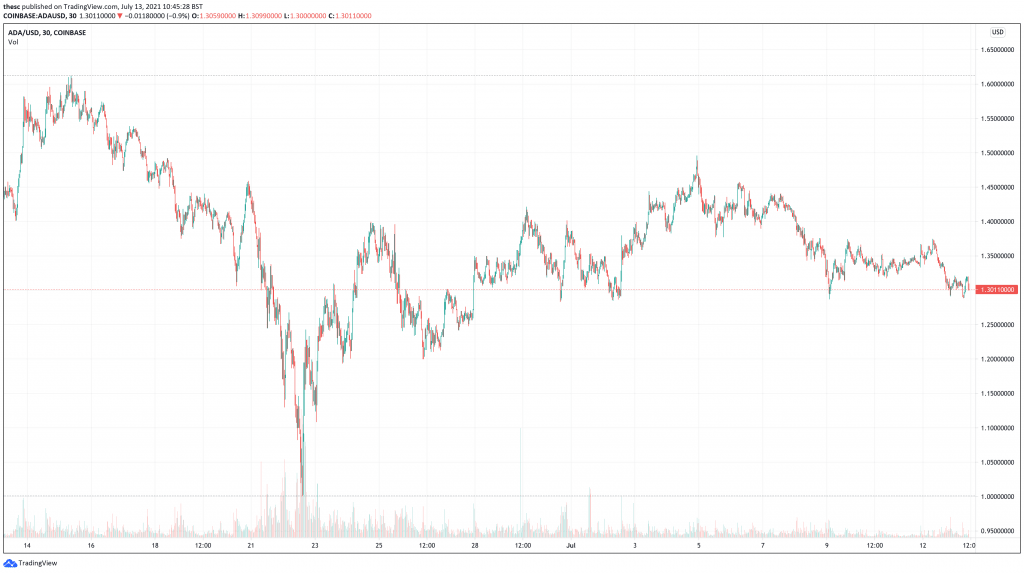 ADA hasn’t fallen as badly as other cryptocurrencies in recent weeks. This is partly because it’s a proof-of-stake crypto, helping it to avoid the bad reputation now attaching to more energy-intensive proof-of-work coins. It’s also because Cardano as a platform is attracting plenty of excitement and hype. It’s yet to rollout smart contracts, something which transform it into a genuine rival to Ethereum. It will do this in or around August, and once smart contracts are live, it will be able to host a greater range of dApps.

This will increase demand for ADA noticeably. And if demand does indeed rise, then $1.31 will start to look very cheap indeed. 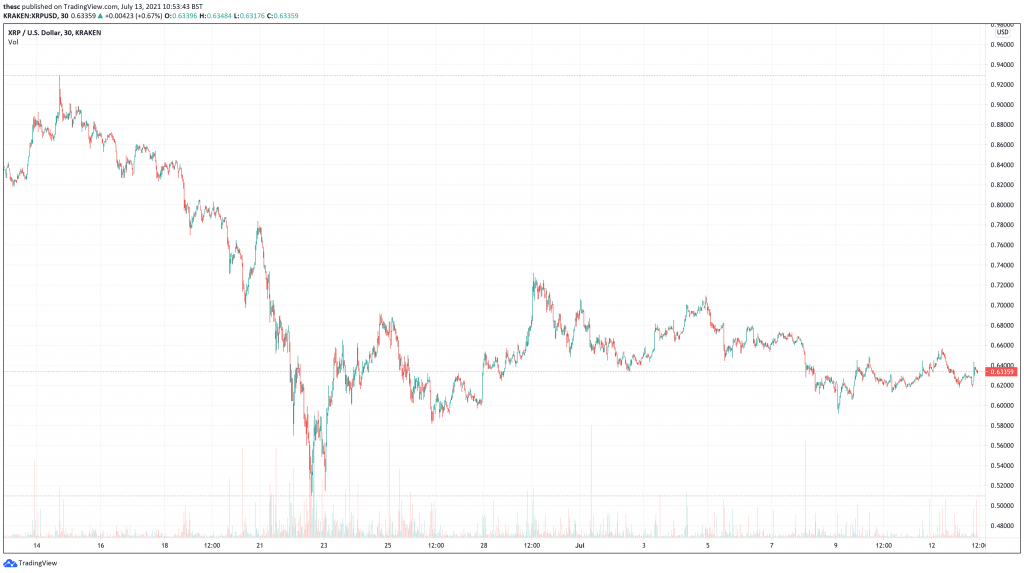 One of the interesting things about XRP is that it’s one of the few cryptocurrencies not to break its 2018 ATH during the early-2021 bull market. Its current record high is $3.40, set back in January 2018. This means its current price is 81% below its ATH from over three years ago.

The main reason why XRP didn’t eclipse its previous high is Ripple’s case with the Securities and Exchange Commission. The SEC initiated this case in December 2020, just around the time the bull market began picking up steam. By doing this, the SEC obviously deprived XRP of the momentum that pushed BTC and other coins to new highs.

However, recent updates on the ongoing case indicate that Ripple is doing pretty well.

#XRPCommunity #SEC_News v. #Ripple #XRP The Defendants’ request for the SEC’s Internal Trading Policies is GRANTED. The Court finds that the information sought meets the low bar for relevance, including potentially with respect to the claims against the Individual Defendants.

@Ripple case, the SEC does not seek a preliminary injunction to stop current sales of #XRP by Ripple.

Because it can’t make a “substantial” showing of a likelihood of success as to a “current” violation.

The mere filing of the Complaint was the weapon!

It’s unlikely that the case will be settled before the end of the year. Nevertheless, if it’s settled, and the outcome is largely favourable to Ripple, expect XRP to bounce strongly. A very good result could even propel it beyond its 2018 ATH. 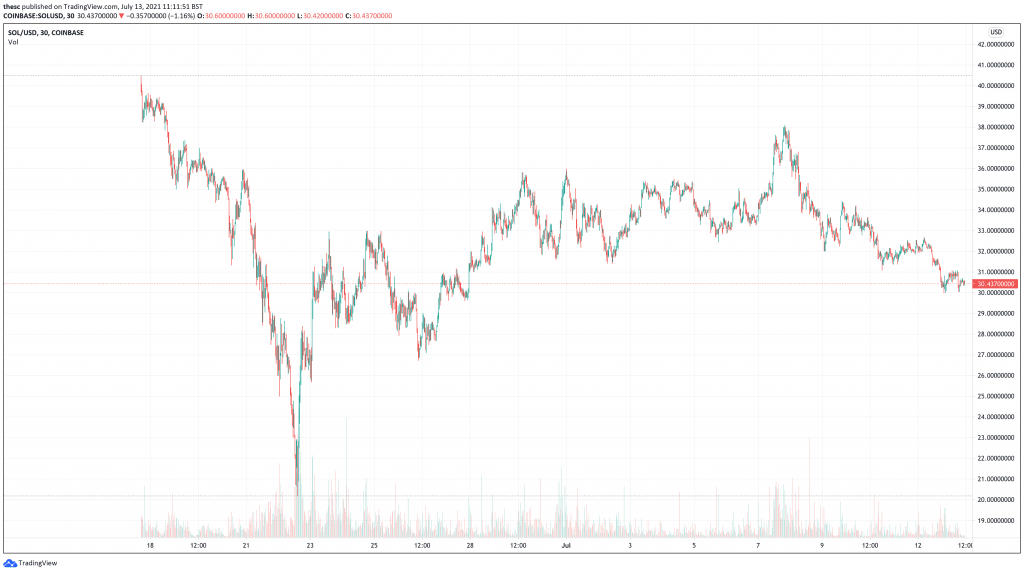 It may have been unable to buck the market-wide trend, but solana likely has a very bright future ahead of it. As a smart contract/dApp platform, Solana uses a novel proof-of-history consensus mechanism that greatly expands its capacity and reduces its energy consumption. This is why it rallied so strongly after Tesla removed bitcoin as a payment option for its cars. It’s also why it’s primed to rise very strongly when the market regains its former bullishness.

Indeed, it has even attracted platforms away from Ethereum in recent weeks, underlining its long-term potential. And underlining why it’s arguably one of the 5 best cryptocurrencies to buy at low prices right now.

Power Ledger will be migrating from Ethereum to Solana and providing delegated staking to POWR holders.

We are excited to announce this change, as Solana can easily support a scale-up of our existing suite of services.

Security, the blockchain, and hashed headers…

If you don’t know the source of yield, you’re the yield