Bitcoin Price Prediction – July 28
The BTC/USD price features a straight-line bullish trend since it embarks upon a recovery motion. The crypto’s valuation trades around the point of $40,337 at a percentage rate of 4.03.

BTC/USD – Daily Chart
The BTC/USD daily chart reveals that the crypto’s price features a straight-line bullish trend. There has been a featuring series of bullish candlesticks since the crypto began the journey to the upside during the July 21st trading session. A bullish candlestick has breached the bigger SMA to the north. The 14-day SMA trend-line is beneath the 50-day SMA trend-line. The Stochastic Oscillators are in the overbought region with conjoined lines, signifying a consolidation moving manner of the market.

Could there be further upside moves as the BTC/USD price features a straight-line bullish trend?

For a while, there could be a line of more upsides as the BTC/USD price features a straight-line bullish trend. It shows now that bulls are having a good time pushing against the valuation of the US fiat currency. However, an indicator has portended that the crypto economy has reached an overbought trading situation. And, that calls for caution in launching more long positions as of now.

On the downside, the BTC/USD bears needed to be on the lookout for a rejection of price-around resistance at $42,500 before placing a sell order. A sudden reversion against the point at $40,000 could signal a return of downward force on a gradual moving outlook. In the meantime, traders may have to stop placing an order while price action isn’t visible. 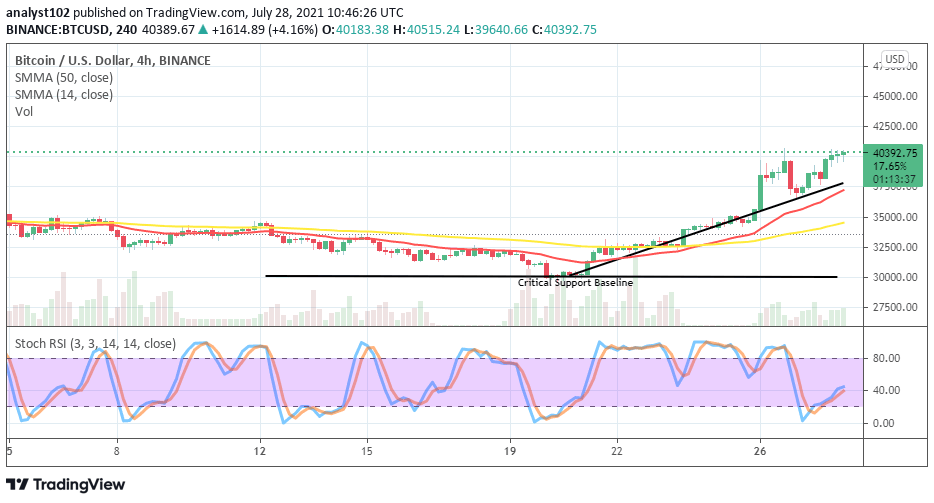 The BTC/USD medium-term chart showcases that the crypto’s price features a straight-line bullish trend. On July 23rd session, the 14-day SMA trend-line intercepted the 50-day SMA trend-line to the north. They still both point toward the upside, indicating an upward motion is ongoing in the crypto economy. The Stochastic Oscillators placed from the oversold region to the range of 40 suggest that the strength to the north hasn’t been exhausted fully. However, traders needed to be wary of placing positions while the market lacks an active move to back their exertion.

But Which Side Of The Moon Are We Going To?