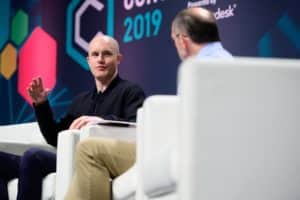 Brian Armstrong, CEO of Coinbase, says he feels called upon to defend the crypto sector since the company is part of the Fortune 500, in part thanks to its IPO.

Coinbase: the benefits of the company’s IPO according to Armstrong

According to reports, Brian Armstrong, CEO of Coinbase, commented on his company on stage at Messari’s Mainnet conference in New York last week, saying that he felt compelled to “defend the crypto sector.”

Here is what Armstrong reportedly said about it:

“[Going public] has put us on the main stage, where we’re able to get deals done with BlackRock and companies like Meta. Now we’re the first Fortune 500 company doing crypto, and so we can go do deal with other Fortune 500 companies now, and they treat us more as a more legitimate force out there.”

Basically, Armstrong sees Coinbase’s listing on the exchange as beneficial in terms of exposure and publicity, distinct from the actual performance of its shares.

And in fact, while he points out that Coinbase is the first Fortune 500 crypto company that will be able to then enter into negotiations and deals with other Fortune 500 companies, Armstrong does not highlight COIN’s 84% collapse from their all-time high of $381 reached on the day of listing in April 2021.

Coinbase and the partnership with BlackRock

In August 2022, Coinbase had signed a partnership with BlackRock Inc so that institutional clients could invest in crypto with the quality of its services.

Basically, the credit institution’s institutional customers can transact Bitcoin in their wallets through Aladdin online banking.

The news of the partnership with BlackRock, had led Coinbase’s (COIN) stock to rise 26% on the stock exchange, to $92. Nothing like the current price of COIN, which hovers around $62.

And while Coinbase’s listing on the stock exchange brings benefits of exposure to institutional and advanced partners, it also exacerbates the company’s exposure from regulatory institutions that still do not know how to manage and regulate crypto.

And in fact, Coinbase has been charged by the US Securities and Exchange Commission (SEC) for listing digital assets that should have been registered as “security.”

Not only that, last summer the SEC reportedly filed formal charges against a former manager and two other Coinbase employees for “insider trading”.

According to Donald Trump, Bitcoin is a scam

FTX Goes Live As First Licensed Crypto Exchange in the UAE – What Does Sam Bankman-Fried Have Planned?